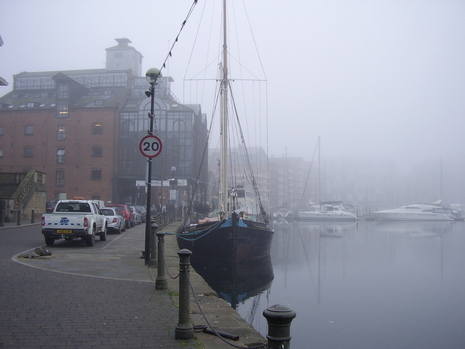 Contentment - In the Life of Mildred Burrows

Finally, her turn. Enter your pin number, banknotes coming over the counter, sliding beneath the glass. A smile from the smart middle-aged lady and then it was all over, and then she was on the pavement outside in the sunshine. Turn left, and the long walk down the high street. Kids were playing on skateboards outside the Co-op, dashing every which way, making a racket, scaring older folks, like Mildred. They didn’t see poor Mildred, she might as well have been invisible.

Bread, milk and tea, and the shuffle around the Co-op was done. Mildred had grown to hate shopping. She’d been buying the same darned things for seventy years, and next week she’d buy the same blimmin things again, god willing. But, oh how boring it all was.

The window of the shop at the end of the row had been painted over for three months, but not that day. It was shining gleaming glass, inviting passers-by to peer inside. Mildred did so. A tanned young woman stared back, as if to say: “What the hell do you want?” Daryl’s Tanning and Sunbed Centre, the sign said. Whatever next.

Mildred’s bungalow was on the same street, three hundred yards further on. It was a long straight road that eventually developed into a feeder road into the city. When Mildred bought the bungalow in 1953 it was a quiet road with an occasional car. Now it bordered on nightmare land, permanent traffic, day and night.

Home again. Kettle on. The budgie welcoming her back as she sat at the table and regained her breath. A rich tea biscuit, and a nap, that’s how she’d like to spend the remainder of her morning, but that would be impossible. A visitor was due, an important visitor. She wouldn’t bother tidying up for him though, or tidying up for herself, she was long past all that palaver. And anyway he wouldn’t expect it. He wouldn’t be staying long, and he had far more important things on his mind.

She shuffled to the lace curtains that covered the front bay window. Double thickness. You couldn’t be careful enough, not these days. Prying eyes, prying people everywhere. People were nosey, always had been, always would be. Then it came into sight, the white van with the green writing on the side. It swerved to the kerbside. A bigger white van tracking it too quickly blasted its horn in anger. The two drivers exchanged glares, but that silly business was over in a flash.

It was the usual chap. Clipped brown hair, pallid skin, Mildred referred to him as “the paleface” behind his back, and there he was ringing the bell. She reached the door, eventually, and opened it just enough so that paleface could enter.

‘Morning Mildred,’ he muttered, neither friendly, nor unfriendly. Just words for another boring old bat. He passed her the two silver sealed cartons and she placed them on the covered table.

She wasn’t sure whether that was a question or a statement, but she nodded and he took that as a suitable reply.

‘Bye,’ he said, and then he was gone, as quick as that. She watched the little van cough into life and crawl off down the road. She watched it all the way until it was swallowed up by a big red bus. Then it was gone.

She returned to the front door and bolted it, then checked the back door and double locked that, and only then would she be ready to open her meals. But she would only eat upstairs, and yes, her bungalow did have an “upstairs” – if only in the loft. She only ever ate upstairs, by electric light, where no-one but her knew she was beginning. She liked it that way.

She retreated to the hall and took the long boathook from beside the staircase and gently raised it until it connected with the indent in the attic entrance. She pushed it up and it folded back on itself, revealing the chrome stairs. She caught the stairs and tugged them gently and they spilled slowly down towards her. It was a beautiful job, the attic stairs. They were gentle and so easy to operate. Even an old buffer like Mildred could handle them, and that was quite something at her age.

As the stairs reached the floor, a single banister sprang up on one side. It was built with the precision of the best Germanic sports car, and just like they did, it always worked.

She placed the two newly arrived cartons in a supermarket plastic bag and slowly ascended the stairs. Once upstairs she turned on the light, and pulled the pulley and the stairs came up after her. It was like Camelot. Up drawbridge. Safe and sound inside. No one could get in, and no one could get out. Intruders thwarted, the battle won, she was cocooned, and it was high time to eat. She sat in her favourite chair and opened the boiled beef and carrots.

She peered carefully inside. There was a small cardboard cylinder there, similar to the gizzard of a toilet roll. Inside the gizzard was a single sheet of paper. Good quality manila paper, smooth and sensuous. She rubbed it gently against her cheek. Clean, smooth, and sexy, as if she could remember what sexy was. After the rubbing, came the squinting. Ah yes, not too much, it shouldn’t take long.

On one side of the roof space, for it would be far too grand to call it a room, was a coil of wire. It was neatly rolled up, exactly where Mildred had placed it last time. She carefully unravelled the wire. No knots, no tangles. That was nice, she didn’t like tangles in the wire for it increased her blood pressure and then anything might happen. She might even have to abandon her hidey-hole and retreat to the bathroom downstairs. She might even not make it, and that wasn’t a nice thought at all.

She fed the wires over the hooks that were neatly spaced along a rafter. The hooks had not been inserted by the meals on wheels man, but by Mildred herself, when she was a great deal younger of course. She couldn’t possibly bash those hooks into the bare timber now. On the end of the wire was a single pronged plug. She inserted it into the machine and turned it on. It lit up, and hummed. It was ancient equipment, but built in the days when equipment was built to last. It had lit up and hummed for more than fifty years, and it would go on doing so for some while yet, indeed for as long as Mildred inhabited this earth.

She slipped on her half moon glasses, and peered down at the paper again. She flexed her right index finger. She would wash and soak it regularly in best Harrod’s soap and so far that seemed to have worked, because in that small wiry finger no sign of arthritis had dared to appear. Another brand you could trust. Harrod’s

She slipped on the headphones, tuned in the radio, turned up the volume a smidgeon, and there it was as it always was. K70602. K70602.  It was like talking to another world. The other side. A parallel universe. It was the most reliable thing in her life. K70602, it was her family, her husband, her children, her whole life, and things would be so different without K70602.

Z90050, she responded. I am Z90050, I always have been, and I always will be, until the day I die. K70602 responded immediately, she always did, and Mildred pictured the young operator at the other end. A beautiful young girl of course, it had to be a girl with the light, delicate and reliable hands as K70602 possessed. No doubt a beautiful young girl, just the same as Z90050 had been when she set out on the long and lonely road that she had specifically chosen.

It took Mildred four minutes to deal with the piece of paper. Not a single mistake, her efficiency impressed even her. Fact was she was almost as good as she was in her prime. Almost. She sat back in the chair and lit a cigarette, and before the match was dead she introduced it to the paper. It burnt quickly and she tossed it into the metal waste-basket and watched it curl up and destroy itself. The paper was no more. She crushed the ashes with the butt of the pen she carried behind her ear, then repeated the exercise from the beginning with the Windsor tart.

When she’d finished she set about returning the hidey-hole to the same immaculate condition it was before she’d appeared, and only then did she lower the stairs and return downstairs.

She was peckish. Prepared a cheese sandwich, but wouldn’t eat it before the call. She could never eat lunch until after the call. She patrolled the hall waiting for the original black telephone to ring. Finally it did. It was a man, but not the delivery man.

‘And was it received?’

The phone died and then it was time to eat, and as she was eating she suddenly remembered that she’d left the tea on the counter in the Co-op. Bother! Oh well, it would give her something to do in the afternoon. The wander back to the shops, and no doubt it would give one or two local busy bodies another opportunity to talk behind her back.

That’s the old baglady from number ninety-two. Never been married you know, lives alone, very sad, never amounted to much.  No friends, never goes anywhere. What the hell did they know?  Did they possess a gold medal for services rendered? Of course not. The highest medal a civilian could ever acquire? It was securely locked away in the safe deposit box in the big bank on the high street, a box she had registered in a false name and address. They never suspected a thing. People don't imagine that old ladies deal in deception. Untraceable to her, of course. It was wrapped up in a Spurs shirt she had bought in Oxfam. She liked Spurs. Not that they ever won anything of course, but in some things you support causes through thick and thin, come what may, no matter how tough the going might become. In some things.

Mildred Burrows was the most contented woman in the borough. If only they knew? She smiled and settled down for a nap, before her unplanned walk. She wouldn’t have changed a thing, not a single thing. It was important to be contented in your work, and Mildred was as contented as it was possible to be.