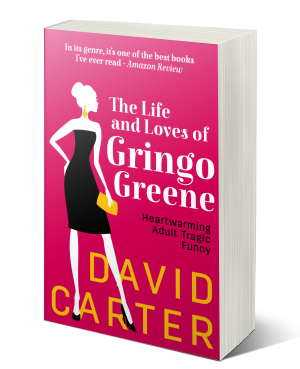 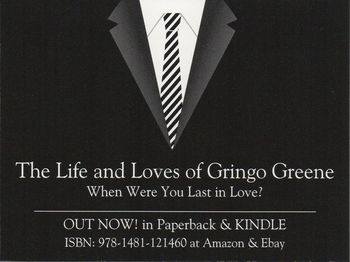 The Life and Loves of Gringo Greene - Book Review 2

David Carter sits very comfortably with this change of genre which is only to be expected from this highly observant, quick-witted, intelligent author whose sense of humour well permeates this particular work of modern fiction. The protagonist, Gringo Greene is a well constructed, thoroughly believable, egocentric testosterone-driven character with only one thing on his mind; particularly since the departure of Glenda Martin from his workplace, Dryden Engineering. To compensate, he plots, plans, connives, never missing an opportunity to consecutively manipulate all manner of females of varying ages into his bed on a Saturday night.

Of course Gringo Greene is a bit of a catch with that well manicured moustache and for the most part he doesn’t have too much difficulty getting his way. Yes, he’s certainly a good-looking guy who takes great pride in his appearance and for the pleasure of his company which is nearly always designed to include the ultimate experience, Gringo Greene expects his ladies to do likewise. Three strikes and they’re out if they don’t conform to his very strict dressing requirements.

Carter paints a highly entertaining scenario with contrasting characters constantly in and out of Gringo Greene’s life. From one overly large Brenda Hodges, last reserve, through a series of long-fancied, desirable work colleagues to others he’s chanced along the way, often more mature, a bit more savvy, a better match for him, Of course Gringo Greene is the prize catch, for whom of those well succumbed to his charms wouldn’t want him for their husband? Marriage? Oh no, not for him! Not for Gringo Greene, he’s as slippery as a satin slip slid to the bedroom floor.

However as the story progresses one’s wondering if he hasn’t been just a bit too clever and taken on more than he can chew, for some of his lovers appear to be quietly outwitting him.

I have to say I’ve never had so much fun finding out! Carter has shown his true talent in the writing of this book. In its easy style it simply bounces along, every page sheer entertainment, compulsively turned but at the same time I found myself grateful for the sheer length of this chunky, fun-filled book because I never wanted to reach the end. I feel sure readers will be hankering after a sequel, or a prequel as Carter puts it and I hope the author will oblige.

From the start the reader readily engages with the characters, the context, the setting, the story. With its low-key running plot gradually stepping up as the story progresses, Carter has the balance just right for he allows no distraction from each of Gringo’s lover’s own tales. This has got to be one of the most fascinating books I’ve ever read, for Carter has the knack of placing the reader in the thick of it. One is hardly aware one is reading, the experience of interacting with the characters is strangely powerful, and I read this with the ease of watching a film.

I congratulate the author on this work for it takes a very clever author to be able to hold the reader’s fascination continuously in this way. He has created s superb male ‘slick-lit’ character in Gringo Greene and the work has much to commend it. Within its genre, it’s one of the best books I’ve ever read and it goes without saying I highly recommend it, without reservation.

Available in paperback and on Kindle

Here's another Review for Gringo Greene

The Life and Loved of Gringo Greene - Book Review 3

“The Life and Loves of Gringo Greene” is a delayed coming-of-age story—the tale of one man’s journey from a life of disconnected, meaningless sexual encounters to emotional maturity. Gringo is the stereotypical modern-day London Lothario—attractive to women, possesses enough money to impress them on fancy dates, has an impressive flat and a good job.

He also demonstrates an exceptional capacity for juggling a string of women—the overweight Brenda, the exotic but sweet Maria, the married Melanie. And at first, he seems convincingly content with his life—the only unhappiness he seems to feel is that the beautiful Glenda has quit Dryden Engineering and gone to America to shack up with a businessman named Harry.

As the novel goes on, his happiness with his lifestyle becomes less convincing, and his control over both his conquests and his emotions begins to slip. His women become less docile, no longer willing to be his doormat or sexual stopgap, and as they assert themselves and seek their own happiness outside of his arms, he is forced to connect with his own emotional core and, frankly, grow up.

While I was interested in the first third of this novel, it was more from the position of a detached observer. As a woman, I didn’t particularly understand or like Gringo in the first part of the novel—he was too slick, too much of a player and a user.

I had much more sympathy for the women in his life, especially Maria. She was sweet, young, and hopeful, and Gringo’s absentminded treatment of her was appalling. I will note, however, that I didn’t always understand the women—their motivations were often unclear. For instance, why was Glenda so intent on being with a man who abused her? She treated him as a trophy to be won, ignoring the abuse issue in her quest to get married. Also, why was the newlywed Melanie so nonchalant about cheating on her husband? Issues like that weren’t explored, and I wish they had been.

That being said, I really enjoyed the novel once Gringo’s tight hold on his life and emotions began to unravel. His confusion and upset over all his women leaving him and moving on, one by one, as well as his slow realization that he can and does love someone other than himself, is a fulfilling experience.

The novel is well-written and the author has a knack for enjoyable dialogue; there are also some truly amusing glimmers of humor thrown in. In the end, I found it to be a positive, even feel-good read—I was pulling for Gringo to find happiness, as well as for the women he loved and lost to find their own happiness. In fact, it reminded me strong of Stephen Sondheim’s “Company”—Gringo is similar to the disconnected, apathetic Roberts, who eventually wakes up and realizes you need more than yourself to truly be alive and find happiness.

I’d certainly recommend “The Life and Loves of Gringo Greene” for readers who enjoy character-driven novels with a strongly-drawn protagonist and interesting, sympathetic secondary characters.

Gringo Greene is available now on Amazon as a paperback and also available on KINDLE , iBooks, Kobo and Nook (Barnes & Noble)