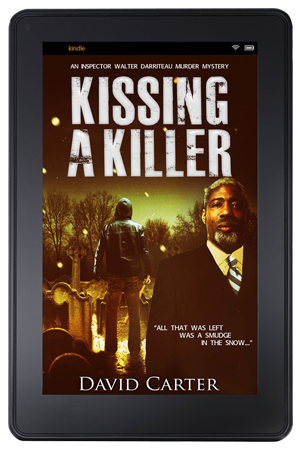 My all new Inspector Walter Darriteau murder mystery is OUT soon. This one is very much a traditional whodunnit and it should keep you guessing till the very end.

Here's a brief extract to whet the appetite.

Corla Revelation resembled Oliver Cromwell, high forehead, large flat nose, and hefty warts aplenty, yet for all that, she was a vivacious woman, and rarely short of admirers.

She made a decent living through her full-time counselling work, and part-time fortune telling business, though where one finished and the other began was becoming increasingly blurred. She liked to say she was a spiritualist, and a medium, and had gone to the trouble in the past of inventing highfaluting sounding associations that she christened: “The British Spiritualist Congress” and the “European Mediums Association” and proceeded to have printed expensive and impressive looking Articles and Certificates, that she framed and set on her walls. They sure as hell impressed Corla, and in due course wowed her clients too. That was the plan, and most times, it worked.

In a good light and on a bright day she could pass for thirty-nine, as her friends would eagerly confirm, especially after Corla had bought the drinks. But on a bad day after a heavy night out, and maybe not standing her corner, those same friends would swear she was fifty-nine, looking sixty-nine. Fact was, no one really knew how old Corla Revelation and her close-knit family of warts were, and that was exactly as she liked it.

She’d always had an eye for the main chance, and that had served her well in the past, and it would continue to do so in the future, and she always paid a great deal of attention to the criminal cases covered in the press, and especially ones from Chester and surrounding areas, and most particularly the ones where financial rewards were offered, and of special interest to her were the worst crimes imaginable, and that invariably meant rape, murder, and death.

The Chester baseball bat murder had certainly piqued her interest, as she devoured all the media coverage she could find. It was causing quite a stir, for it wasn’t everyday that a well-liked and well-known local woman was murdered in her own home in the genteel city of Chester.

In her quiet moments Corla believed she possessed ESP powers, and she would test that ability to the max by sitting back in her favourite wing-backed armchair, a bottle of whisky on the small table close by, with her favourite crystal cut glass, as she attempted to reconstruct the face of the killer in her mind. If you don’t believe in yourself, she mused, how could you expect others to believe in you? He will come to me, she would say aloud. He will come.

He’s a tall man, and dark too, that was eminently clear, though whether that intelligence had been garnered through her imaginary powers, or subconsciously, via the increasing media coverage, it was difficult to tell.

Corla sipped twenty-year-old malt whisky, and closed her eyes and blanked her mind, and let the force swirl over her, and through her, and then she said aloud in a real strange voice: It will appear, as it always does, everything about him will materialise, and sooner than we think, and then, I shall be famous.

She reached out and topped up the glass. Always nice to whet the whistle before one went out on the town. She glanced at her expensive wristwatch, a present from a long ago wealthy lover. She’d quite forgotten his name. The watch ticked on, as it always did, never missed a beat. 8.22pm. Give it another ten minutes, she thought, and she would slip on her favourite faux leather coat, and head down to the city centre, and meet some friends, and drink the night away.

It's going to be fun! - Stay tuned for full details of release date and where the book can be bought - it will be out in paperback and ebook.

As ever, thanks for reading,