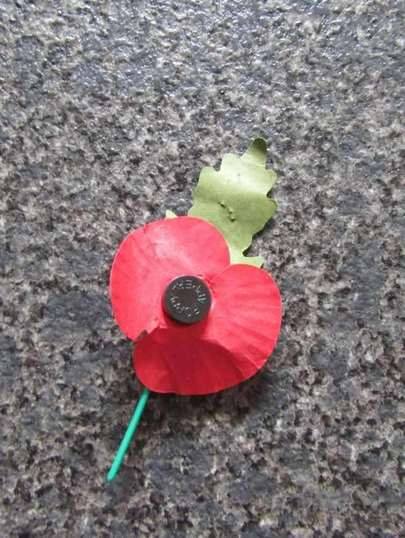 Here’s a pic of my well-worn poppy this year, and I know it’s a bit late, but better late than never, as the say.

And especially fitting after the despicable events in Paris. I feel so sorry for all those young kids who went out on a Friday night (thought that was supposed to be a holy day, btw, but never mind!) to a music concert, and never came back.

What kind of god could ever justify such a thing?

Makes no sense at all to me, and practically everyone else.

Anyway, people of Paris, the whole civilised world is grieving with you, that’s for sure.

And here’s the topical poetry, and there’s a question for you to follow. You’ll know this piece, but do you know who wrote it? Answer in a tick.

Here are the important words first:

In Flanders fields the poppies blow
Between the crosses, row on row,
That mark our place; and in the sky
The larks, still bravely singing, fly
Scarce heard amid the guns below.

We are the Dead. Short days ago
We lived, felt dawn, saw sunset glow,
Loved and were loved, and now we lie
In Flanders fields.

Take up our quarrel with the foe:
To you from failing hands we throw
The torch; be yours to hold it high.
If ye break faith with us who die
We shall not sleep, though poppies grow
In Flanders fields.

Yes it’s In Flanders Fields of course, and particularly apt it is this week, methinks, and it was written by?

Here’s the answer, courtesy of Wikipedia, and thank you for that.

"In Flanders Fields" is a war poem in the form of a rondeau, written during the First World War by Canadian physician Lieutenant-Colonel John McCrae.

He was inspired to write it on May 3, 1915, after presiding over the funeral of friend and fellow soldier Alexis Helmer, who died in the Second Battle of Ypres. According to legend, fellow soldiers retrieved the poem after McCrae, initially dissatisfied with his work, discarded it.

It is one of the most popular and most quoted poems from the war.

So there you have it, John McCrae. I’ll remember that now.